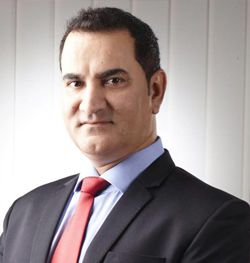 The journey of Mr. Harish Tahiliani in the organization begin three decades back when he was perhaps a next door young boy fledging his wings of desires and seldom knew that a phone call from his father then would change his life path for ever.

Hailing from Gujarat (India) he hails from a family which has several generations of business experience in processing and trading pulses and splices. Arab & India Spices was started as trading company mainly for spices by his father Kumarlal Tahiliani in the year 1986 as he could foresee the immense potential for food trade in the Middle East. Mr Harish Tahiliani started assisting his father from 1989 to handle some of the operations of the business and used to shuttle between UAE and India on a regular basis. In the year 1990 Mr. Kumarlal Tahiliani decided to start the first processing plant for pulses as he could see the great potential in this region for this product. He was cautioned by many leading food business leaders of the hurdles of setting up a pulses processing unit in UAE however throwing the caution to the wind he started up the processing line, with a mere 5 tons capacity per day. However, as Mr. Kumarlal Tahiliani and Mr. Harish Tahiliani could not devote their full time the company was managed by partners who were lacking the entrepreneurship and visionary values which led to a series of bad decisions which kept pulling back the growth of the company.

In the year 1994 Mr. Kumarlal finally summoned Mr. Harish Tahiliani from India to the UAE. Mr. Harish was forced to quit his studies and travel to UAE to take up the reigns of business in his own hands, after which there was no turning back. Within years of his taking up the business he expanded from 5000 sq. ft of premise to 40,000 sq. ft premise in the emirates of Sharjah incorporating 5 processing plants of pulses. In the year 2003 he purchased 352,000 sq. ft of land in Ajman (which was the first emirate to give ownership of commercial plots to expats). In the year of 2007 Arab & India Spices LLC moved its base to Ajman in the newly accomplished processing facility having 8 state of the art production lines with 325 M tons of production a day. In 2011 Dec under the leadership of Mr. Harish Tahiliani Arab & India Spices LLC received SME Award for most exports from Dubai Chamber of Commerce. In 2015 Mr. Harish Tahiliani bought an entire hatch of lentils in a bulk vessel to Sharjah which was the first of its kind in the UAE. Pressing his goal for growth and achievement Arab India Spices has currently 17 production lines and capacities of processing 700 M tons a day.

This year he has embarked on a project to build pulses storage silos in the emirate of Sharjah and setting up 12 storage silos which shall have an aggregate capacity of 52,000 M Tons, which is first and one of its kind in this region for storing pulses.

Mr. Harish Tahiliani has been featured thrice in the Forbes (ME) Top Indian Business Leaders. Apart from his business achievements Mr. Harish Tahiliani does a lot of philanthropy and has tied up with Human Appeal International where in every year he shall be giving away a part of the profits from some of his product categories.